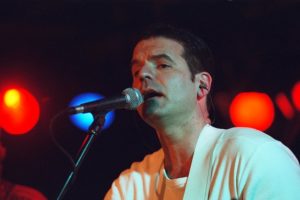 We sat down with Cole Petrone, a fan favourite in our Coal Harbour Lounge, to chat about his path to music (everywhere from Puerto Rico to the Arctic Circle), why playing at the Pan Pacific is so special to him, and how he seems to know every single request.

Tell us a little about yourself.

My dad is American, my mum is Nicaraguan, and I was born and raised in Puerto Rico. I have called Vancouver home for the last six years, after a career in hospitality that took me to 110 (yes, you read that number right) countries.

How long have you been singing and songwriting?

I have been singing and songwriting for around 20 years – I actually was a bit of a “late bloomer” in terms of music. I didn’t come from a particularly musical family and only ended up picking it up in college, being surrounded by a lot of friends who played guitar.

My first job was in the Arctic Circle, working for GE at a radar site. The solitude and isolation left me with a lot of time to practice and perfect the guitar.

How do you feel that your multicultural exposure and extensive travels have influenced your singing and songwriting?

Well, my cultural upbringing certainly planted a seed to be curious about other cultures! Growing up in Puerto Rico, I was exposed to a lot of salsa and I often find that syncopated beat sneaking into my music.

Every country has its own distinct rhythms and sounds, so all of my experiences across 110 countries have enriched my music in some way.

I’m also fluent in Spanish and German, so it’s always fun to sing to the international crowd at the Pan Pacific.

What does a typical day look like for you?

Well, I am a professor at several local universities and colleges, so you can find me teaching between 8:00 and 5:00 on a typical day. I play about 300 shows a year as well, so I generally play 4 or 5 nights a week, both in Vancouver and across North America.

My Wednesday, Friday, and Saturday evenings generally end at the Pan!

What’s the best part of playing at the Pan Pacific?

At the risk of sounding cheesy, it truly is the people. I have been playing here for six years now, as long as I’ve called Vancouver home, and it never feels like just a gig or a job… more like having fun with family.

“A lot of musicians forget that it’s not about us… it’s about that person’s date night, that person’s wedding anniversary… that couple who is in their eighties and I’m playing their wedding song. That’s what it’s about.”

Music brings people together, and I love that the Pan unites a really diverse international crowd. Tables will end up joining each other, someone will start singing along, and suddenly you’ll have a conga line snaking its way throughout the Lounge.

Our guests (many of them regulars now) always enjoy your requests challenge to “name any song from any band in the last 100 years.” Somehow you always seem to deliver!

I have to admit that there are a few tricky ones, but I have been playing for so many years that I almost know what to expect – at least most of the time!

The top 5 requests I get are:

Last question, and we know it will be tough to choose: what is your favourite song to play?

That’s like asking me to choose a favourite child! I will say this – my favourite artists are definitely The Beatles, James Taylor, and Neil Young, so any song by them is a favourite of mine.

Thank you so much to Cole for his time! With so many songs and stories to share, we are lucky to have him with us a few nights each week. You can also listen to a preview of his original music, here.